In 2019, Dr. Mary Elizabeth Hartnett and the John A. Moran Eye Center received the Paul Kayser Global Award for her work “Toward a Safe and Effective Treatment for Retinopathy of Prematurity”. According to Dr. Hartnett, “This grant money has helped support research experiments and post-doctoral and undergraduate students who have performed the studies. We have made important strides to the basic understanding that is important to finding safer and more effective treatments for premature infants at risk of retinopathy of prematurity.”

Retinopathy of prematurity (ROP) is a leading cause of childhood blindness and affects infants whose retinas are incompletely vascularized. We used a representative model of the human disease, ROP¹, to test the effects of regulating the angiogenic receptor of vascular endothelial growth factor (VEGF receptor 2, VEGFR2) on pathologic intravitreal neovascularization, analogous to stage 3 ROP, and on the desired physiologic vascularization of the previously avascular retina, which is ongoing in the extremely preterm infant at risk of ROP. The representative model of ROP is in rat; therefore, in order to regulate and not inhibit VEGFR2, we developed a novel method to deliver gene therapy by subretinal injection of lentiviral vectors with endothelial cell specific promoters that drive the expression of shorthairpin RNAs (shRNAs) to VEGFR2 and compared to control lentiviral vector delivered shRNAs to luciferase². By regulating VEGFR2 signaling specifically in retinal endothelial cells, we inhibited intravitreal neovascularization but extended physiologic angiogenesis. Our studies provided the premise for current studies testing doses of anti-VEGF agent, bevacizumab, on ROP³. However, a concern exists that since VEGF is important in the neural development of the infant and retina, inhibiting its function may be deleterious to cognitive and retinal function.
Therefore, we have experimented on specific ways to regulate VEGFR2 in retinal endothelial cells instead of inhibiting the ligand VEGF with intravitreal anti-VEGF, which is neither specific to VEGFR2 or to endothelial cells. Since it is not safe or feasible to perform gene therapy in infants, we are studying proteins that regulate VEGFR2 signaling or interact with the receptor, and from our outcomes, lead to the development of future novel therapeutics. Besides ways to promote normal vascularization, we are also interested in pathways involved in retinal neuroprotection. One protein we have been interested in is erythropoietin (EPO), long known for its hematopoietic effects, but postulated as having a role in angiogenesis and neuroprotection. We found that exogenous EPO extends vascularization of the previously avascular retina in the rat ROP model⁴, but that knockdown, but not inhibition, of the erythropoietin receptor specifically in retinal endothelial cells extended physiologic vascularization of the previously avascular retina and also appeared to interact with angiogenic signaling through VEGFR2⁵, suggesting a regulatory effect on VEGFR2 signaling through the EPO receptor. Our progress report describes our work this past year to better understand the role of EPO receptor signaling in retinal vascular and neural diseases.

We were restricted from ordering rats for new experiments due to the Covid-19 and, therefore, report on our experiments using transgenic humanized mice that we were able to continue to breed and use to address our hypotheses.

Erythropoietin (EPO) has been suggested as important for neuroprotection and angiogenesis. EPO triggers signaling through its receptor (EPOR) to the downstream JAK/STAT pathways for erythropoiesis and may also trigger signaling or interact with other receptors. It is challenging to study EPOR signaling, because antibodies to EPOR are unreliable for immunohistochemistry⁶,⁷, so it is unclear if administered EPO activates signaling processes in particular tissues. In addition, EPO or EPOR knockout mice are lethal in embryonic life limiting the study on tissue protection in adults⁸. To address these limitations, we used humanized transgenic mice in which the murine EpoR gene was replaced with the human EPOR gene⁹, resulting in hypoactive signaling through human EPOR due to reduced transmembrane protein stability and not from reduced EPO/EPOR binding¹⁰, ¹¹. We tested the hypotheses that signaling through the EPOR was angiogenic and neuroprotective in ROP:

1) To determine if signaling through EPOR is angiogenic following vascular loss and repair, similar to aspects associated with high oxygen-induced damage to newly developed capillaries in ROP.

2) To determine if signaling through EPOR protects against retinal neural damage after vascular loss and repair.

We used humanized mice with either hypoactive EPOR signaling (HEPOR) or littermate wild type mice with normal EPOR signaling (mEpoR) in a murine oxygen-induced retinopathy model (OIR). In this model, high (75%) oxygen induces obliteration of newly formed capillaries. When mice are brought into ambient air from high oxygen, there is regrowth of vasculature into the avascular retina as well as intravitreal neovascular budding (neovascularization) at the junctions of vascularized and avascular retina. The regrowth is analogous to capillary loss and regrowth in aggressive posterior ROP. To assess angiogenesis, we measure areas of intravitreal neovascularization and avascular retina. To assess neural structure and function, we measured electroretinograms (ERGs) and retinal structure following immunohistochemical staining in adult 8-week old mice that had been exposed to OIR.

1. To determine if signaling through EPOR is angiogenic following vascular loss and repair, similar to aspects associated with high oxygen-induced damage to newly developed capillaries in ROP.

In OIR compared to mEpoR, HEPOR mice had increased avascular retina after one day or 5 days in 75% oxygen and at 5 days after return to ambient air at postnatal day 17 (p17). However, there was no difference in intravitreal neovascularization between HEPOR and mEpoR mice in OIR at p17. Although VEGF and p-STAT3 proteins were increased in mEpoR mice at p17 OIR, there were not significant differences in retinal angiogenic factor expression levels between HEPOR and mEpoR OIR mice at p17 despite similar areas of intraviteal neovascularization. Our data support the hypothesis that EPOR signaling was angiogenic by leading to greater regrowth of vascularization following oxygen-induced capillary damage and also in pathologic intravitreal angiogenesis, as shown by control mEpoR mice having greater angiogenesis compared to HEPOR mice in OIR. Our data suggest that EPOR signaling may regulate angiogenic signaling pathways also since hypoactive signaling, which led to greater avascular area and the potential for hypoxia-induced angiogenesis, did not lead to greater expression of angiogenic factors (manuscript submitted to IOVS). Additional study of EPOR signaling or its regulation on other angiogenic pathways will be considered.and motivate more young researchers to participate in this type of training.

2. To determine if signaling through EPOR protects against retinal neural damage after vascular loss and repair.

Injury and repair caused by the oxygen-induced retinopathy model (OIR) reduced visual acuity thresholds, ERG amplitudes, and thinned the outer plexiform and inner nuclear layers of both mEpoR and HEPOR 8-week old adult mice. In injured HEPOR compared to mEpoR mice, scotopic a-wave amplitudes were reduced despite no change in outer nuclear layer thickness, and peripheral rod, but not cone number, was reduced. Scotopic b-waves were reduced in injured HEPOR mice compared to mEpoR mice, and rod bipolar cell ectopic neurites were increased in both genotypes after injury suggesting a potential reparative process to preserve connectivity to photoreceptors and maintain the b-wave. Normal EPOR signaling appeared important since bipolar cell ectopic neurites and b-waves were lower in the HEPOR than mEpoR injured mice¹². Our data support the hypothesis that EPOR signaling is neuroprotective following vascular loss and regrowth and appeared important in preserving some of the b-wave amplitude of the ERG by the formation of ectopic rod bipolar cell neurites, which restored connectivity with rod photoreceptors.

In conclusion, we found that signaling specifically through the EPOR pathway is angiogenic and neuroprotective following oxygen-induced damage and repair, processes that may occur in some forms of ROP, namely aggressive posterior ROP. We will continue to study regulation of EPOR and VEGFR2 as well as how EPOR might regulate VEGFR2 and other angiogenic signaling pathways. 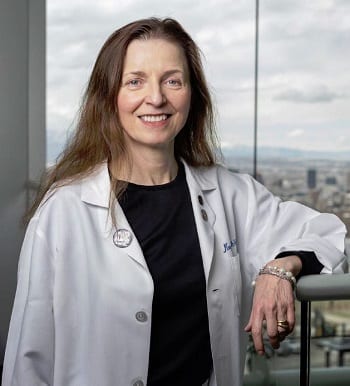 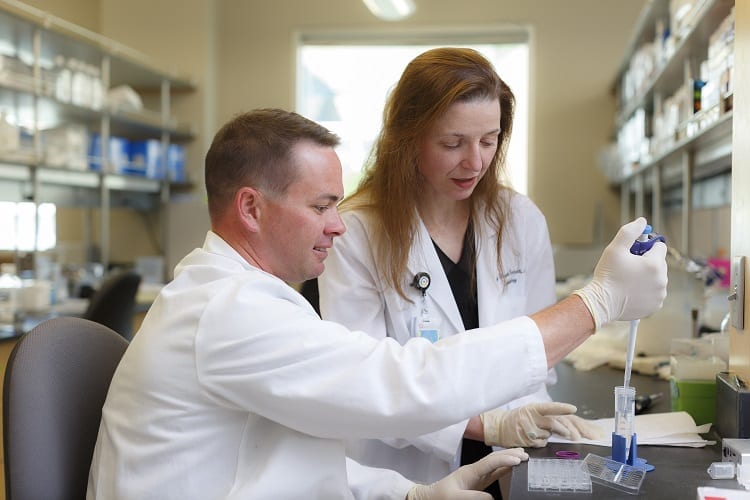 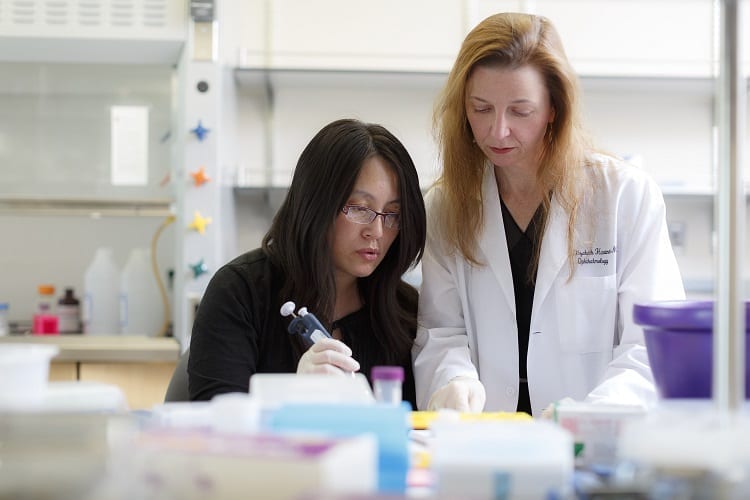