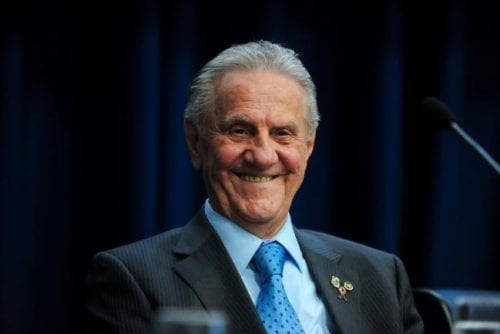 Prof. Dr. Suel Abujamra devoted his life to Ophthalmology in Brazil as he used to say: “mobilize and raise awareness about all blindness that could be avoided.” He passed away on December 29, 2018, after bravely fighting among doctors at Sírio Libanes Hospital and his family by his side. Dr. Suel leaves a great legacy of students, alumni, teachers, and great friends, who are affected by his charisma and teachings throughout his successful trajectory. He was born in Ourinhos, in the interior of São Paulo, on September 25, 1933. His parents Abuassali Abujmara and Matilda Abujamra were very proud of his brilliant career. He graduated from the Faculdade de Ciencias Médicas do Rio de Janeiro in 1957, with a postgraduate degree at University of São Paulo (FMUSP), obtaining a Ph.D. in 1972 and after ten years he received the title of Associate Professor of FMUSP. He also was a Professor of the Faculdade de Medicina de Santo Amaro (UNISA).

Dr. Suel Abujamra was the pioneer in the diagnosis and treatment of diabetic retinopathy in Brazil, with fluorescein angiography, laser photocoagulation and thousands of public health care appointments in the SUS (Sistema Unico de Saude) in his own Institute. The passion for teaching was Dr. Suel’s mark. At the Suel Abujamra Institute (ISA) he has formed several residents in ophthalmology and clinical and surgical retina, cornea and glaucoma fellows. In his scientific career, he was a subspecialty book editor and has written more than 20 book chapters, as well as numerous papers in his field. His private library has a large collection of ophthalmology books, as well as a vast archive of vitreoretinal disease images. In his wonderful career in Brazilian ophthalmology, he has held important positions as: president of the Brazilian Council of Ophthalmology (CBO), president of the Brazilian Retinal and Vitreous Society (SBRV), president of the Latin American Group of Angiofluoresceinography and Laser in Ophthalmology (GLADAOF), delegate of the Pan-American Association of Ophthalmology (PAAO), and member of the Academy of Medicine of São Paulo. Dr. Suel Abujamra was very active in participating in retina and ophthalmology events as speaker, moderator, president, and as honored Professor. In addition to his memorable presence and scientific contributions in Ph.D. boards and examining boards in Brazil.

He recently created Brown April, a campaign to raise awareness about the prevention and fight against blindness in the State of São Paulo, for which he won the title of Citizen of São Paulo, on November 4th, 2016. Dr. Suel was honored by the great names of ophthalmology, his great friends: Elisabeto Gonçalves, Rubens Belfort Junior, Márcos Ávila, André Gomes, Mauricio Maia, and Ácacio Muralha Neto. He thanked the honor and recognition along with his family: Mrs. Roseli and his sons Caio, João, and Julia Abujamra. He was a human doctor, an admirable teacher and a valuable friend, who we will miss. Everyone admired him for his big smile, his words of encouragement and his teachings that will last forever in each of us: his students and friends. Dr. Suel Abujamra love of life and ophthalmology will never be forgotten.