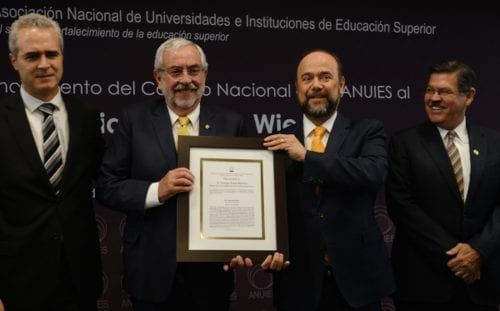 Wong, Alma Paola. Photograph of Enrique Graue Wiechers receiving ANUIES recognition. Milenio, 20 Aug. 2019, https://www.milenio.com/politica/graue-exige-rescatar-a-universidades-con-deficit
The Rectors of the most prestigious universities in Mexico presented an acknowledgment to Dr. Enrique Graue Wiechers, Rector of the National Autonomous University of Mexico. This award is a recognition by peers for his defense of higher education, university autonomy, science, technology and humanities. This prize was awarded at the venue of the Association of Universities and Institutions of Higher Education (ANUIES), which brings together public and private universities.
Dr. Graue was president of the Pan-American Association of Ophthalmology 2005-2007. Dr. Graue presented one of the PAAO’s named lectures, the Moacyr E. Alvaro Pan-American Lecture, at the 28th Pan-American Congress of Ophthalmology in San Francisco, in October 2009. He was awarded the Gradle Medal for Good Teaching at the 31st Pan-American Congress in Bogotá, Colombia, in August 2015. He was president of the 32nd Pan-American Congress of Ophthalmology in February 2016 in Guadalajara, Mexico. In 2019, the Pan-American created the Enrique Graue Wiechers Award for Transformational Leadership to recognize senior ophthalmologists who have been key in the creation or transformation of ophthalmological institutions, hospitals, and/or associations.