EPIDEMIC OF DIABETES: A CRITICAL CHALLENGE. 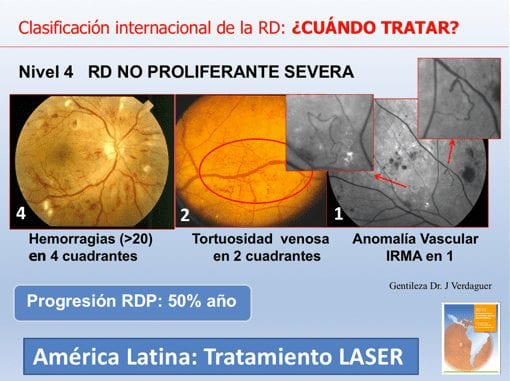 EPIDEMIC OF DIABETES: A CRITICAL CHALLENGE

The demand for service in ophthalmology will continue to increase throughout the world due to the aging of the population and the uncontrolled increase of diabetes, increasing visual deficiency and blindness.

There is an epidemic of diabetes and the International Diabetes Federation estimates that there are 425 million people with diabetes in the world and that it will increase 48% by 2050. It also considers that the population between 20 and 64 years old is the most affected, with 320 million, but who do not take care of their health or go to sanitary controls. In 2015, the same federation estimated that there were some 93 million people in the world with some degree of retinopathy, estimating that they should currently be around 100 million.

The final objective of a program in diabetic retinopathy is to prevent visual loss by early detection of retinopathy that does not develop macular edema or progress to a proliferative stage. If there is vision compromise or a bleeding stage it is already late and the visual prognosis is bad. For the above it is required:
1.- Education for doctors and patients.
2.- Increase the coverage of eye fundus screening and
3.- Perform timely treatments.

The first recommendation is education. There are several guidelines to educate the general ophthalmologist in classifying and establishing the management of retinopathy 1,2. It is estimated that between 70 to 90% of diabetics do not have retinal damage and the progress towards proliferative retinopathy is less than 0.5% per year and we should only educate the patient to optimize their self-care, perform periodic eye funds since Retinopathy affects vision in late stages. However, in a severe non-proliferative stage (Figure N 1), progress to a proliferative stage is 50% per year and in Latin America the proposed treatment is laser.

The second is to choose a screening method to detect retinopathy and to refer. Telemedicine has been validated, being the English model one of the most developed in the world, achieving that diabetic retinopathy ceases to be the main cause of certifiable blindness in working age, but I note that 75% of the referrals are due to suspicion of edema macular, being necessary to generate a second line of screening, to rule out other macular pathologies.

The third recommendation is to create laser centers, perform more photocoagulations by the general ophthalmologist and achieve patient access. We must also ensure the management by specialists of macular edemas with intravitreals, since it is the main cause of visual loss affecting 3 to 10% of the patients and 20% of them have a severe irreversible visual limitation. It is usually associated with poor metabolic control and if you have a visual remnant with vision less than 0.3 that does not correct with lens there are low vision aids that can help your integration into the community.

There is much to be done to defeat blindness by Diabetes and we must adjust to local realities in both human and economic resources. We must start knowing what to do and how to do it since the management of diabetic retinopathy in visual health is an urgent challenge.

Figure N 1: Clinical Signs of a Severe Non-Proliferative Retinopathy that Requires Laser Management, as Recommended by the Guide1,2.